Measured as respirable fraction of the aerosol.

3.Manufacturer can provide a detailed elemental analysis including other trace elements. The (wt %) values will        change if silica fume is from ferro silicon production.

*The melting point temperature is dependent on the type of amorphous silica as well as the source.

Silica Fume is generally considered a nuisance dust of low toxicity. Use and handling of Silica Fume does not represent a health risk when normal safety rules are observed. Silica Fume when handled and stored in accordance with this document is unlikely to cause harmful effects. It is possible for Silica Fume to contain trace amounts (<0.05%) of crystalline silica, which has been shown to cause silicosis, and has been identified by IARC and NTP as a possible human carcinogen.

A. Acute Effects: No data available

Silica Fume is generally considered a nuisance dust of low toxicity consequently it is considered to pose minimal risk of pulmonary fibrosis (silicosis). Avoid prolonged exposure to silica fume dust concentrations above the recommended exposure limits, unless the protective equipment is used.

It is possible for Silica Fume to contain trace amounts (<0.05%) of crystalline silica, which has been shown to cause silicosis, and has been identified by IARC and NTP as a possible human carcinogen.

Heating Silica Fume at temperatures above 500ºC (930ºF) for prolonged time periods will convert amorphous silica to the crystalline phases Cristobalite and Tridymite that may cause silicosis. Increased temperatures will increase the formation rate of these phases.

No adverse effects are expected. Silica Fume is not considered dangerous to the environment. 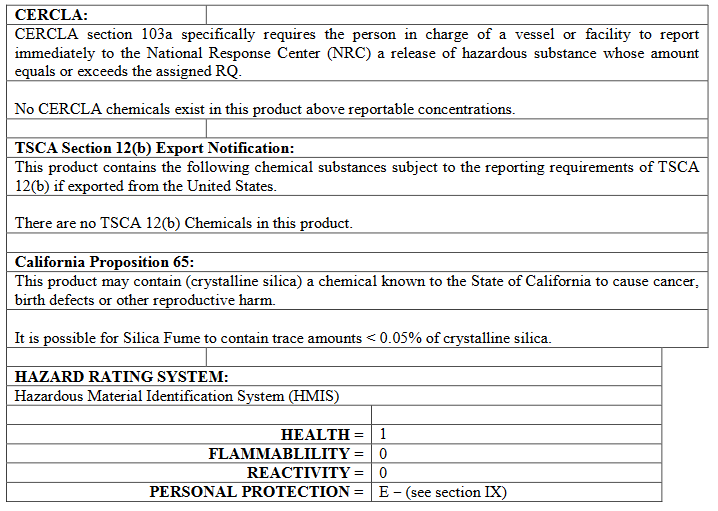 All information, recommendations, and suggestions in this MSDS, concerning our products are based on tests and data believed to be reliable, it cannot be guaranteed. Since the actual use by others is beyond our control it is the user’s responsibility to determine the safety, toxicity and suitability for their own use of the product described herein.

Corrosion of reinforcing steel is the most significant and costly cause of concrete deterioration. It doesn’t matter whether the chloride comes from the ocean or from deicing salts, the results are the same. Silica-fume concrete is used widely in applications where the concrete is exposed to salt from any source. The reduced permeability of this concrete can result in many years of extended life for a structure.

Corrosion damage in concrete is a multi-step process as follows:

While the chemistry of the portland cement used plays a role in sulfate attack, it has been shown that the water-cementitio us materials ratio (w/cm) is also a critical factor. Reducing the w/cm effectively reduces the permeability of the concrete. Adding silica fume will further reduce the permeability resulting in further delays of any adverse reactions.

Acid or other chemical attack:

The overall resistance of silica-fume concrete to attack by an aggressive chemical is not significantly different from that of conventional portland cement concrete. However, the reduced permeability of silica-fume concrete may extend the life of a concrete structure or extend the time between repairs simply by slowing down the rate of the attack. If protection against a particular chemical is required on a project, we strongly urge testing to include exposure of specimens of varying silica fume contents to the particular chemical.

The reduction in permeability is not the only contribution of silica fume to durability. There is ample evidence that silica fume, when used alone or in conjunction with a suitable fly ash, can reduce or eliminate the potential for alkali-aggregate reaction when reactive aggregates are used. Again, testing will be required to determine the appropriate amount and types of cementitious materials to be used for each particular application.

Another way to look at the use of silica fume is from the viewpoint of constructability. Here, we are actually stepping across the boundary between effects on fresh and hardened concrete to take advantage of all aspects of the performance of silica-fume concrete to make construction easier or, in some cases, even possible. Here are a few examples:

More and more state DOTs are using combinations of silica fume and fly ash to reduce the heat of   hydration  for concrete used in bridge decks. Reducing the total amount of cementitious material will reduce heat and help prevent early-age cracking.

The main benefit from increased cohesion can be seen in shotcrete, whether it is for new construction, repair of existing structures, or ground support in tunneling operations. Using silica fume in shotcrete allows for greater thickness of shotcrete layers, particularly when shooting overhead, and a significant reduction in rebound. Silica-fume shotcrete frequently includes steel fibers to provide increased flexural strength. Silica fume is compatible with all of the accelerators that are commonly used in shotcrete. Once the shotcrete is in place, all of the expected benefits of silica fume in hardened concrete come into play. An additional benefit is the increased bond strength of the silica-fume shotcrete to the underlying material and between lifts of layers in multi-pass applications.

Concrete bleeds as the heavier components (cement and aggregates) settle under the influence of gravity before the concrete stiffens. As the heavier components settle, the lighter water is forced upward. Some of the water is trapped under aggregate particles or reinforcing steel and some of it reaches the surface of the concrete. This movement of water takes place in what are called capillary channels. Once the water evaporates, these channels serve as shortcuts for aggressive agents such as chloride ions from deicing salts or sea water to get back into the concrete. Therefore, the reduction or elimination of these channels improves the durability of the concrete.

n addition to the improvements in durability, the lack of bleeding allows a more efficient finishing process to be used with silica-fume concrete flat work. For conventional concrete, it is critical not to conduct finishing operations until all bleeding has stopped and all bleed water has evaporated from the surface. Thus, there is usually a several hour waiting period after the initial placing and finishing operations. Once bleed water has disappeared and the concrete has gained sufficient strength, final finishing is started.

With silica-fume concrete showing no bleeding, the finishing operation can be continuous from placement to texturing and curing. This approach is called “one-pass” or “fast-track” finishing and is particularly advantageous in structures where silica fume is likely to be specified for durability such as bridge decks or parking structures. Unless a special finish is required, it is not unusual for finishing of silica-fume concrete to be completed within a half hour of concrete arriving on the deck.

SILICA FUME is a very fine pozzolanic material,composed of amorphous silica produced by electric arc furnaces as a byproducto f the production of elemental silicon or ferrosilicon alloys.

SILICA FUME can be used in a variety of cementitious products such as concrete, grouts ,mortors,fibercement products, plus refractory and ceramics, elastomer and polymer applications.

SILICA FUME is produced in conformance with the ASTM C 1240 specifications.The quality is controlled and monitored throughout the entire production process to ensure that it meets or exceeds specification requirements. 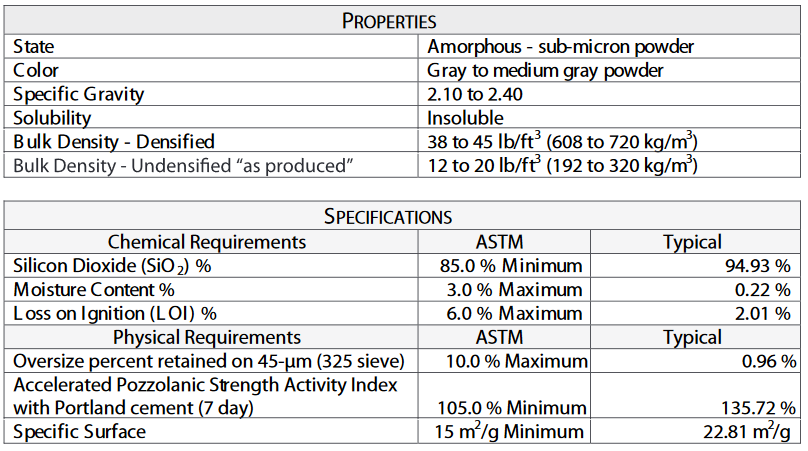 MECHANISM OF SILICA FUME’S
POZZOLANIC REACTION IN A CEMENTITOUS SYSTEM

SILICA FUME in contact with water goes into solution within an hour.The silica in solution forms an amorphous silica-rich,Ca-poor,gel on the surface of the silica fume particles and agglomerates. After time the silica-rich,Ca-poor,coating dissolves and the agglomerates of  silica fume react with free lime (CaOH2) to form calcium silicate hydrates (CSH). This reaction is called the pozzolanic reaction.

SILICA FUME should be kept dry, out of weather and the elements.

SILICA FUME is generally considered a nuisance dust.Use and handling of silica fume does not represent  a health risk when normal safety rules are observed. Direct contact may cause irritation of eyes. Prolonged contact may cause skin irritation. Inhalation may cause respiratory irritation resulting in coughing and shortness of breath.Th is product may be harmful if swallowed. Do not get in eyes and avoid prolonged skin contact .Do not take internally. Wash thoroughly with water after handling. For more detail, see the MSDS.

The information given here is based on best knowledge,and is believed it to be true and accurate.Advanced Cement Technologies assumes no responsibility for the use of these statements,recommendations or suggestions,nor are they intended as are commendation for any use,which would infringe any patent or copyright.

Silica fume is usually categorized as a supplementary cementitious material. This term refers to materials that are used in concrete in addition to portland cement.

Silica fume is frequently referred to by other names:

Silica fume is a by-product of producing silicon metal or ferrosilicon alloys in smelters using electric arc furnaces. These metals are used in many industrial applications to include aluminum and steel production, computer chip fabrication, and productions of silicones, which are widely used in lubricants and sealants. While these are very valuable materials, the by-product silica fume is of more importance to the concrete industry. 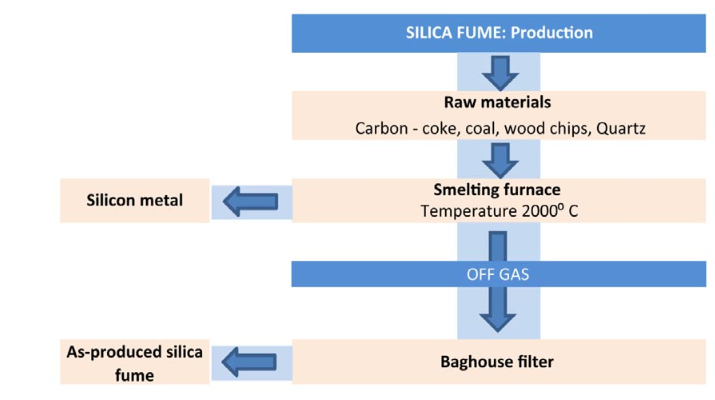 Silica fume has historically been available in three basic product forms: undensified, slurried, and densified. There is no data available, after many years of testing, to show that any one of the product forms will perform better in a concrete mixture than any of the others.

Densified silica fume is produced by treating undensified silica fume to increase the bulk density up to a maximum of about 400 to 720kg/m3. This increase in bulk density is usually accomplished by tumbling the silica-fume particles in a silo, which causes surface charges to build up. These charges draw the particles together to form weak agglomerates. Because of the increased bulk density, this material is more economical for truck transportation.

Densified silica fume works very well in concrete. However, one caution when working with this product form is to ensure that the mixing is adequate to break up the particle agglomerations. Mixing in some types of mixers such as those that are used in dry mix shotcrete, roof tiles, or other applications where coarse aggregate is not present may not be adequate to break up the agglomerations. In those situations, an undensified silica fume may be more appropriate. Contact the Silica Fume Association for assistance in these types of applications.

Our products meet or exceed ASTM and AASHTO standards.

Since 1995, Advanced Cement Technologies, LLC (ACT), an industrial minerals supply company, has specialized in the concrete and cement-based product markets, with their High Reactivity Pozzolanic admixtures for High Strength and High-Performance applications.

Our products meet or exceed ASTM and AASHTO standards. These products are approved for use in all USA State and Federal Department concrete projects and through associations such as the American Concrete Institute and Decorative Concrete Council.